Master Xuan (Shwen) has over 100  years of accumulated experience in martial arts.  With just Wing Chun alone, he has been practicing for over 50 years.

Master Xuan began studying Judo at the age of 11 in 1963, practicing for 4 years.  In 1968, he joined Park Jong Soo's Taekwondo Institute, and trained until 1975.  In 1970, he began studying Wing Chun under Sifu Wong Siu Leung, who was GM Wong Shun Leung's student.  In 1972, he quit collage to just study martial arts.  In the afternoon, he trained 2 hours in Taekwondo; in the evening, he trained 3 hours privately under Sifu Nelson Chan, who was a protégé of GM Moy Yat.  At night, he attended Sifu Wong Siu Leung's group class for 3 hours.

In 1975, he moved to Vancouver and studied under Sifu Winston Wan, who had trained under GM Leung Sheung and GM Lok Yu.  All his grandmasters were top students of Great Grandmaster Ip Man.

In 1993, he went to San Francisco for a year, where he studied Wu-Style Taiji under Master Zhou Ruixin from Hanzhou, China.  In 1994, he moved to Thailand where he took up Qigong and Yang Taiji, while teaching Wing Chun privately to a handful of students.   In 2007, he took up Chen Taiji under Master Lu Yong, who was the second generation student of Chen Fa Ke.

When he lived in Thailand, he was unable to find any Wing Chun masters who were comparable to what he had in the past 25 years.  This was the turning point of his Wing Chun journey.  He decided to teach himself as if he was a total beginner, and reexamine everything that he had learned before.  He took everything apart and studied every piece microscopically. He took into account that Wing Chun was developed 350 to 400 years ago, and that much information had gotten lost in translation, passing down from one generation to another; therefore, refining the status quo would not be sacrilegious, but rather respectful for recovering Wing Chun to its original state.  The task, he found was not as difficult as he thought it would be, when he realized that all the information was encrypted and embedded in the Wing Chun forms. Deciphering it would mean discovering Wing Chun as the founders had meant it to be.  From hence, Master Xuan has dedicated his life in decrypting the Wing Chun forms, and sharing the information to those who are willing to learn.

Wing Chun is one of the youngest fighting arts developed in China; therefore, you can presume that the founders had examined other arts, and had borrowed the best parts from them to merge into one compact system.  In other words, it was one of the earliest mixed martial arts.  The founders created it as a universal fighting art rather than a rigid system and culture.  So, Bruce Lee's open-thinking was not unique, but was influenced by Wing Chun's original concept ... a universal art developed for individuals.

Master Xuan teaches his students to explore and discover Wing Chun for oneself, and to use it according to one's own structure and experience.

Check out the homepage of the Xuan Wing Chun Academy (International headquarters) at www.xuanwingchun.com 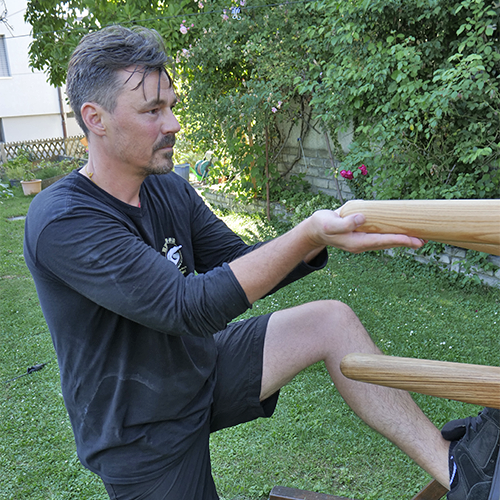 Ben Buchli started  martial arts in 1993 at the age of 17, after an injury that ended his semi-professional soccer (football for  Europeans) career.
He started with the Lee Shing lineage of Wing Chun under late Shifu Juerg Ziegler in Switzerland, and later directly under Shigung Austin Goh in London, UK. After reaching Shifu level in the Lee Shing lineage he migrated to Madison, WI, USA, in 2002 where he taught Wing Chun to adults and kids in his own school for almost ten years. During this time without a suitable teacher available, he sought to deepen his understanding and skills in martial arts of various styles (Modern Arnis, Muay Thai, Brazilian Jiu Jitsu, Shaolin Lohan Kung Fu, and others) from high caliber instructors in class and/or seminar settings.
Despite meeting many well respected martial arts instructors, none of them satisfied Ben's thirst for a deeper understanding. Finally, after moving back to Switzerland in 2010, he had the opportunity to personally meet and train with Shifu Danny Xuan in 2014, with whom he had had online contact since 2007.
Ben was highly impressed with Shifu Xuan's ability to easily shut down any attacks at will, and counterattack with ease. After experiencing not only Shifu Xuan's physical abilities, but also his excellent teaching qualities, Ben decided to switch to the Xuan System of Wing Chun. Shifu Xuan can easily transfer his skills and knowledge, partly because of the logical and systematic approach, and partly because of his deep understanding and excellent teaching ability. Since then, Ben has made it his mission to excel in the Xuan Wing Chun approach and spread this unique system in Switzerland and Europe. For this reason, he's been training the Xuan Wing Chun system religiously, and meets with Shifu Xuan at least once a year for ten 8-hr days of intensive private training. In the meantime, he has private and in-class students in Switzerland (see www.xuanwingchun.ch) and surrounding countries.

Shifu Buchli speaks German (as well as basic french and italian), and will be helping in guiding the German-speaking students.

"With Shifu Xuan's online course, Wing Chun Revelation, anyone now has the opportunity to learn the unique Xuan Wing Chun system from the comfort of one's home. I can confidently say that the online lessons come close to having Shifu Xuan provide private instruction.
The systematic and logical structure of the system will allow good progress despite not having personal interaction with Shifu Xuan.
While interactions are necessary in Wing Chun to fully grasp the system, the online course provides the basics, which can then be trained with a partner. Luckily, the system allows for self-monitoring, such that extended periods without a teacher will not lead to bad habits. Moreover, the video reviews and/or live sessions (which are part of the certified, masters, and doctorate courses) with competent instructors fill the remaining gaps and iron out any problems.

I'm looking forward to working with some of you, either in person or via live online sessions!"